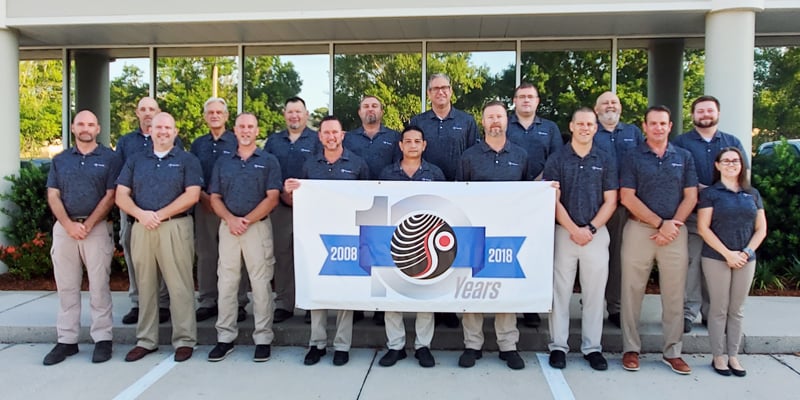 Ross is a seasoned sales account executive and brings a wealth of customer service and management experience to Security 101. Ross joined Security One Systems in August 2000. By implementing the “basics,” and creating strong customer relationships, Ross helped to increase the overall sales of the Central Florida market by over 28% per year. In May of 2005 Security One Systems, Inc. was purchased by Ingersoll Rand. At Ingersoll Rand, while mentoring new sales representatives, Ross was able to continue to increase sales and become the top salesman for 2007. In the fall of 2008 Ross decided to team up with Security 101. He is co-owner of the Central Florida Security 101 branch and is looking forward to being able to provide “fanatical customer service.” Ross has been trained for design and implementation of Lenel, Honeywell Access Control/Alarm, Panasonic, Pelco, Napco and Fiber Optic security products. Ross Manfredi is an industry leader with an extensive background in management, operations, and successfully handled a fifteen million dollar P & L for North Florida. Ross has over two decades of experience in the security industry. He began his security career in 1991 with Corporate Security Management, Inc. a Nationwide Integrator and quickly moved up within the company.  Leaving his position there as Vice President of Operations in 2003 to join Security One Systems, Inc., Ross filled the Branch Managers role in the Orlando, Florida market.  Along with strong Sales leadership, Ross built the branches operations team which doubled its revenue production under his leadership. In May of 2005 Security One Systems, Inc. was purchased by Ingersoll Rand. Ross held several roles while with Ingersoll Rand, the latest being North Florida’s District General Manager. After several years of growth and success in the North Florida Market, Ross decided to join forces with Security 101.

Pat is responsible for the implementation of all software systems, database conversions, access control conversions.  Pat has over 25 years of experience working in the security industry.  After serving 4 years in the United States Army as an electronic security specialist, he started out his career with Sonitrol in 1987, where he began as an installation technician and quickly moved up to the Technical Manager.  After leaving Sonitrol, Pat worked for a few different security companies gaining further experience in the security industry.  Pat joined Security One Systems, Inc. in 2004, and has helped grow the technicians and staff with his knowledge and expertise. Patrick’s take care of the customer mentality makes him a key contributor to the success of the Central Florida Security 101 branch.

Jennifer has over a decade of experience working in the fire and security industry. She started her career as the Assistant Purchasing Manager for Firetronics, Inc in 2002 where she quickly gained a healthy knowledge of the industry. After leaving Firetronics in 2003, Jennifer went to work for Security One Systems as the Branch Coordinator. There she worked closely with and directly supported both the Operations and Sales teams and was recognized for her efforts with a promotion to the North Florida Sales Assistant shortly after Security One was sold to Ingersoll Rand in 2005. In February 2010, Jennifer joined the Security 101 team as the Executive Assistant, responsible for supporting all members of the branch and assisting with the day to day operations.

Jason has years of experience in the security industry. After serving 6 years in the Army National Guard working as a communication specialist, Jason started his career with Scott Alarm in 1995 as a lead service technician. In 1998, Jason left Scott Alarm to further his career at Pinkerton Systems Integration. After several years of working in the installation and service departments gaining knowledge of access control and video surveillance, Jason joined Security One Systems in 2001 as a project manager. During his time at Security One, Jason worked closely with the branch manager to build the operations team which doubled its revenues and helped the branch through its transition to Ingersoll Rand in 2005. In May of 2010 Jason rejoined forces with the Security 101 office as the Operations Manager, responsible for all operations of the Orlando office.

Stephen has a broad technical background with experience that began while serving as a systems support technician for finance operations in the United States Marine Corps. Upon transitioning from the service, he focused his general technical background on the security industry. Working with Group 4 Falck, Stephen developed a knack for providing technical support on digital video recorder installations. Leveraging this talent, a few years later, he teamed up with Security One Systems Orlando (Ingersoll Rand Security Technologies), where he added low voltage electronics to his security industry skill set. At Security One, Stephen filled a variety of roles including: installer, service technician, technical support specialist, and project manager. In late 2005, upon close-out of a million dollar integration project, Stephen re-enlisted in the Marine Corps, where he has served for the last eight years--most recently as a Finance Officer. At the conclusion of his military service, Stephen ecstatically rejoined the core team at Security 101 because of their passion for security and their commitment to providing fanatical customer service. Stephen holds a Bachelor of Science degree in Computer Science from the University of Maryland University College.

Richard is responsible for advising and supporting Sales Account Executives and customers pre- and post-sale, in understanding and comparing design solutions. This help insures the solutions work successfully for what the customer has intended. Richard has 25+ years of experience in the security industry and began as an alarm and installation and service technician in Hawaii. After moving to Florida in 2005, he joined Security One as a Technician which was then sold to Ingersoll Rand. He joined the Security 101 team in July 2010 and was originally responsible for the technical aspects of installations. Once the need was recognized that a Sales Engineer was needed, Richard’s technical experience made him a great candidate for the role. Richard has also served 12 years in the Air National Guard and has a Bachelor’s Degree in Aeronautical Science from Embry Riddle University.

As a commercial integrator, Security 101® is able to deliver best-in-class design, installation and service by utilizing our unique and proven business approach within the security industry.