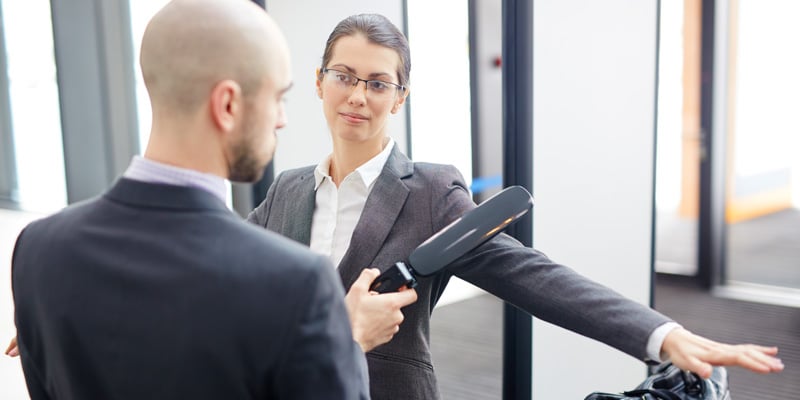 Metal detectors are one of the best tools for catching people attempting to carry guns, knives and other metal-based weapons into schools, courthouses, sporting venues and other indoor and outdoor locations.

Exactly how these devices work can vary somewhat by manufacturer and type of unit. But basically, they rely on static or portable power sources to create electricity that flows through a transmitter coil to create a magnetic field capable of detecting metal objects and then alerting users with flashing lights, audible beeps—or both.

Telephone pioneer Alexander Graham Bell is often credited with developing the first working metal detector in 1881 to look for a bullet fired by a gunman into the body of President James Garfield. The bullet was not found in time and Garfield died. But the concept was good and metal detectors became increasingly sensitive and reliable.

But as terrorists and criminals began carrying carbon- and plastic-based weapons, many facilities requiring a high level of security turned to millimeter-wave scanners (MMS) capable of detecting both metallic and non-metallic objects. Though similar to x-ray machines, MMS units use a much lower level of radiation than those used for medical diagnostic purposes. The MMS waves pass through clothing and are reflected back by a person’s body and any concealed weapons.

Metal detectors can cause delays as people empty their pockets of keys, coins, etc. That’s why some buildings administrators use random metal detector searches. By keeping students, employees or other visitors off balance, they are less likely to attempt to carry a weapon into a facility. A recent report from the National Center for Education Statistics showed just over 10% of public high schools conduct random metal detector checks.

And while metal detectors are easy to use, it does help to provide security personnel with training to ensure the units are being used as effectively as possible.

Do you have the drive to become the next locally-owned integrator with the power of a national company behind you? Let’s discuss it.