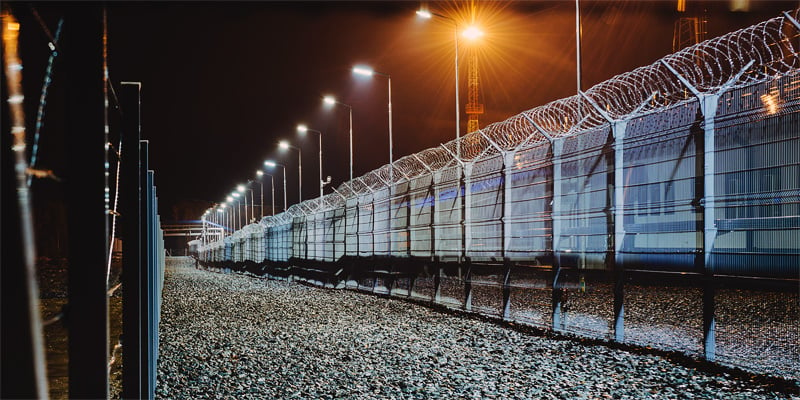 Critical infrastructure – transportation, energy, water systems – and many more government and privately- owned facilities are vital to our everyday lives. Protection of these assets falls to a variety of federal, state and local agencies, as well as the private organizations which own about 85% of the nation's infrastructure.

The security industry works hand-in-hand with law enforcement agencies by providing the technologies and expertise required to help defeat both external and internal terrorists.

Consider perimeter security to be the first line of defense. The best place to stop would-be terrorists or other criminals is before they get near a valuable target. Low-tech security measures can play an important role.

Security gates and fencing with razor wire can act as a deterrent and help stop anyone approaching by foot. All fencing should be set in three-feet-deep by foot-and-a-half-wide trenches filled with concrete to discourage anyone from trying to enter by digging. Additionally, razor wire on top of fencing discourages climbing. And make sure there are no trees just outside the fence that would allow someone to climb and jump over the fence.

Terrorists often choose cars and trucks to deliver a payload of powerful explosives. Specialized fencing that incorporates the same type of steel cable used to help stop fighter jets on aircraft carriers can be used to halt a 15,000-pound truck traveling at speeds of up to 50 miles per hour. This type of fencing is given a K-rating, a measure of how much kinetic energy, or speed plus weight, it can resist. Similar barriers were installed in Nice, France after an Islamic State terrorist vehicle attack.

Fiber optic cable buried just below the perimeter surface can detect anyone passing over it to create an alarm. Waterfront infrastructure, such as airports and power plants, can take advantage of anchored, underwater fences consisting of stainless-steel rope and the same type of fiber optic cable to prevent divers from gaining access.

Gates should be fortified to withstand a high-speed vehicular impact and should be designed so only security officers can open them after verifying the identity of pedestrians, drivers and passengers. Depending upon the sensitivity of the target being protected, it also might be wise to arm the guards after providing additional training.

Other measures, such as bollards – sturdy concrete blocks or barriers – can stop vehicles and prevent buildings or other targets from taking a direct hit. Architects can design bollards that also act as planters or benches in order to blend into the landscaping plan.

The next steps call for electronic security equipment, including video cameras and access control.

As a true systems integrator, Security 101 is the only call you need to make — Count on Security 101 for project management, access control, visitor management systems, and all your system integration requirements: