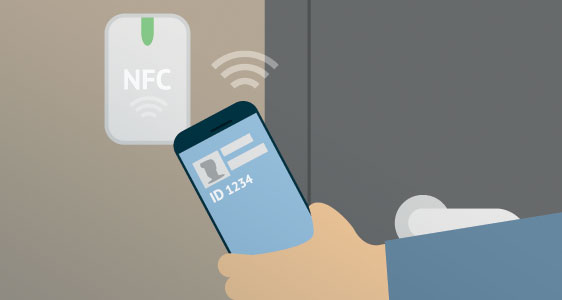 A technology called Near Field Communication (NFC), may hint at the future of access control. NFC is based on the RFID technology inside typical access cards, and many smartphone manufacturers have been embedding NFC chips in their flagship handsets for the past few years. Because of NFC’s increasing prevalence, smartphone access control may become a reality for organizations with tight security needs.

Simply put, your smartphone would be able to work as an access card: a specific application or credential securely loaded onto the NFC chip would allow you to use your phone to unlock doors, among other things. The first obvious benefit is convenience: you are more likely to remember to bring your smartphone with you rather than your access control card when you leave your home or your desk. Similarly, you are less likely to lend your phone to a friend or colleague to get into a building.

The other benefits are slightly less apparent, but still worth consideration. Employing a smartphone access system would result in a reduction in overall cost. No longer having to manage access cards for employees and visitors means less administrative time spent. Not using cards or fobs anymore means less money spent on materials. And for organizations that might consider biometric-enabled access control, many high-end smartphones now include fingerprint readers, which give you two bonuses: less money spent on expensive fingerprint scanners, and easily enabled two-factor identification for ultra-secure facilities or departments. Imagine holding your smartphone near the access control panel and a window appearing on the screen of your smartphone, prompting you to type in your PIN or validate your fingerprint. Within seconds, you are granted access.

While there have been success with pilot programs at a few universities and corporations with large campuses, the widespread implementation of smartphones as part of an access control system will likely take time. The technology is still relatively new, and there are some concerns regarding security against hackers, despite many phones using sophisticated encryption techniques. In the meantime, we’ll just have to use our phones the old fashioned way—for internet browsing and taking selfies.